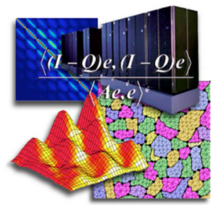 AMG2013 is a parallel algebraic multigrid solver for linear systems arising from problems on unstructured grids.  It has been derived directly from the BoomerAMG solver in the hypre library, a large linear solver library that is being developed in the Center for Applied Scientific Computing (CASC) at LLNL. The driver provided in the benchmark can build various test problems. The default problem is a Laplace type problem on an unstructured domain with various jumps and an anisotropy in one part.

AMG2013 is written in ISO-C.  It is an SPMD code which uses MPI as well as OpenMP.  Parallelism is achieved by data decomposition.  The driver provided with AMG2013 achieves this decomposition by simply subdividing the grid into logical P x Q x R (in 3D) chunks of equal size. The benchmark was designed to test parallel weak scaling efficiency.

AMG2013 is a highly synchronous code.  The communications and computations patterns exhibit the surface-to-volume relationship common to many parallel scientific codes.  Hence, parallel efficiency is largely determined by the size of the data “chunks” mentioned above, and the speed of communications and computations on the machine.  AMG2013 is also memory-access bound, doing only about 1-2 computations per memory access, so memory-access speeds will also have a large impact on performance.
Further information can be found in the amg2013.readme file in the docs directory of the benchmark.

See the following papers for details on the algorithm and its parallel implementation/performance: