On January 31, 2020, the Sequoia supercomputer and its file system were decommissioned after nearly 8 years of remarkable service and achievements. Ranked No. 1 in the Top500 global supercomputer rankings shortly after its dedication in 2012, and still ranked No. 12 at the end of its service, Sequoia delivered the required petascale computing capabilities that had become necessary to ensure the continued safety and reliability of the nation's aging nuclear deterrent. Commissioned as the latest system from the long-term partnership between LLNL and IBM, Sequoia immediately became a national asset and multi-national-laboratory resource. It was widely regarded as one of most efficient systems for processing petabyte- and exabyte-size data sets.

The 20-petaflops/s Sequoia system had two main National Nuclear Security Administration missions both of which required "predictive simulation" of complex systems. Predictive simulation is not just computing the behavior of a complex system (the results), but also generating a precise quantification of the uncertainty associated with the results. This is analogous to the "margin of error" cited in scientific and technical papers or commonly used to qualify poll or survey results. Achieving predictive simulation is critical to resolving scientific problems when validation by physical experiment (for example, underground nuclear testing) is impossible, impractical, or prohibited by law or treaty. Predictive simulation is necessary to sustain the nation's shrinking nuclear deterrent into the future as the deterrent continues to age. Sequoia's two missions were to:

Sequoia was primarily water cooled. Though orders of magnitude more powerful than such predecessor systems as ASC Purple and BlueGene/L, Sequoia was roughly 90 times more power efficient than Purple and about eight times more than BlueGene/L relative to the peak speeds of those systems. For systems of this scale, energy efficiency is of central importance and absolutely essential to drive down operating costs.

Sequoia will be dismantled during the first few months of 2020 to make room for the next generation supercomputer—namely, the exascale-capable El Capitan system, slated for delivery in 2022. 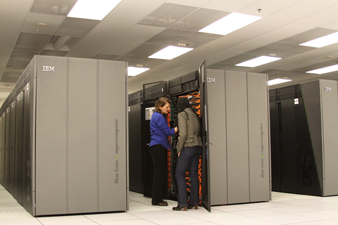 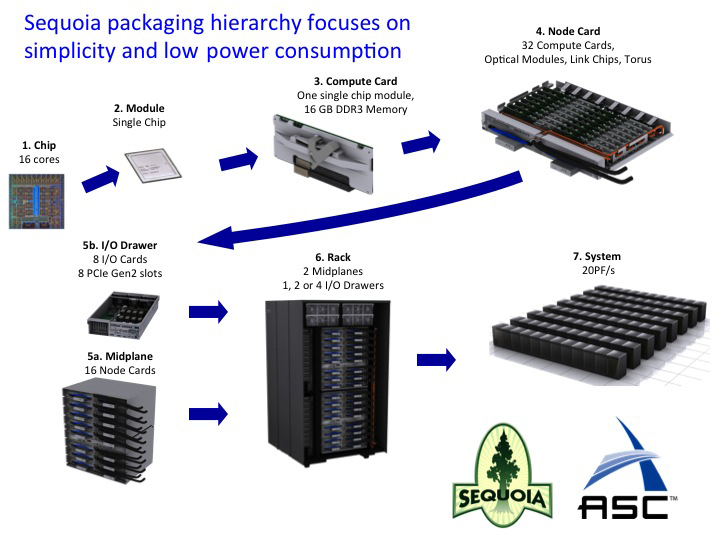 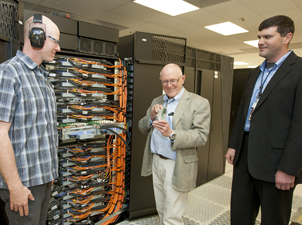 Gordon Bell examines a Sequoia component while
Mark Springer (left) and Adam Bertsch look on during
a tour of the LCC B453.